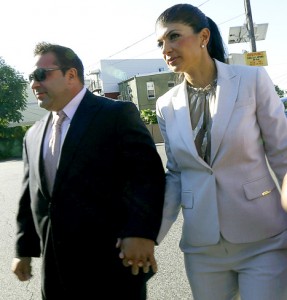 UPDATE: The Giudices were each released on $500,000 unsecured bail bonds. They must surrender their passports and they are not allowed to leave New York or New Jersey until their next hearing, which is scheduled for Aug. 14. During the hearing, it was also revealed that Joe, who was born in Italy, is not a legal U.S. citizen. An onlooker says the spouses “were very solemn” during the hearing, adding that there were “no tears” and “they were very professional.”

One day earlier, the Bravo reality stars were charged in a 39-count indictment with conspiracy to commit mail and wire fraud, bank fraud, making false statements on loan applications and bankruptcy fraud.